The Smile are an English rock band formed by Radiohead members Thom Yorke and Jonny Greenwood and Sons of Kemet drummer Tom Skinner. They made their surprise debut in a performance streamed by Glastonbury Festival in May 2021, and released two singles in January 2022. The band is a collaboration with Radiohead producer Nigel Godrich. 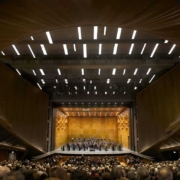