A photo exhibition of some of the most beautiful photographs taken by baron Whilelm Von Gloeden who spent in Taormina most of his life and, thanks to his work, made our town worlwide famous.

The exhibition – by displaying more than twenty original photographs now belonging to the artist Bruno Di Bello – aims to show the artistic evolution of the photographer, detailing his journey from the first nudes to the last portraits. 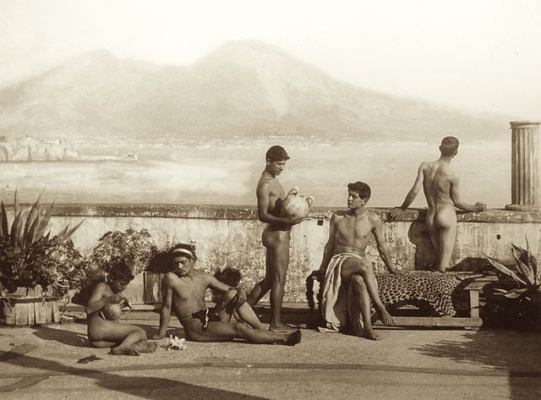 Wilhelm Iwan Friederich August Freiherr von Gloeden (September 16, 1856 – February 16, 1931) was a German photographer who worked mainly in Italy. He is mostly known for his pastoral nude studies of Sicilian boys, which usually featured props such as wreaths or amphoras suggesting a setting in the Greece or Italy of antiquity. From a modern standpoint, his work is commendable due to his controlled use of lighting as well as the often elegant poses of his models. His innovations include the use of photographic filters and special body makeup (a mixture of milk, olive oil, and glycerin) to disguise skin blemishes.
After studying art history in Rostock (1876), Gloeden studied painting under Karl Gehrts [de] at the Weimar Saxon-Grand Ducal Art School (1876–77) until he was forced by lung disease (apparently tuberculosis) to interrupt his studies for a year, convalescing at a sanatorium in the Baltic Sea resort of Görbersdorf. In a search for health, he travelled to Italy (1877–78), first staying in Naples before moving on to Taormina in Sicily. He lodged at the Hotel Vittoria before buying a house near San Domenico Convent. Apart from the period 1915-18, during the First World War, when he was forced to leave Sicily to avoid internment as an enemy alien, he remained in Taormina until his death in 1931.

Aug. 27/Sep. 6 - Inferno by Dante at the Alcantara Gourges