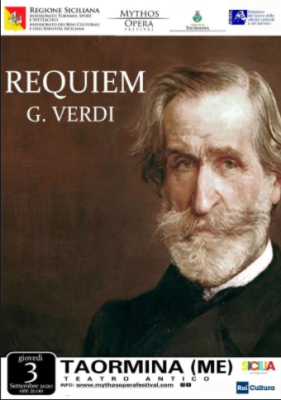 The Messa da Requiem is a musical setting of the Catholic funeral mass (Requiem) for four soloists, double choir and orchestra by Giuseppe Verdi.
It was composed in memory of Alessandro Manzoni, an Italian poet and novelist whom Verdi admired. The first performance, at the San Marco church in Milan on 22 May 1874, marked the first anniversary of Manzoni’s death. The work was at one time referred to as the Manzoni Requiem. Considered too operatic to be performed in a liturgical setting, it is usually given in concert form of around 90 minutes in length. Musicologist David Rosen calls it ‘probably the most frequently performed major choral work composed since the compilation of Mozart’s Requiem’. 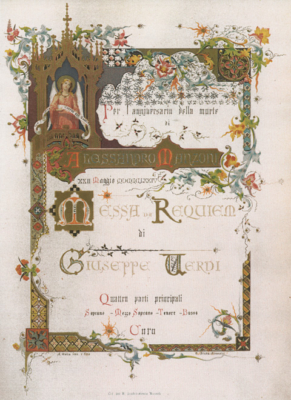 Throughout the work, Verdi uses vigorous rhythms, sublime melodies, and dramatic contrasts—much as he did in his operas—to express the powerful emotions engendered by the text. The terrifying (and instantly recognizable) Dies irae that introduces the traditional sequence of the Latin funeral rite is repeated throughout. Trumpets surround the stage to produce a call to judgement in the Tuba mirum, and the almost oppressive atmosphere of the Rex tremendae creates a sense of unworthiness before the King of Tremendous Majesty. Yet the well-known tenor solo Ingemisco radiates hope for the sinner who asks for the Lord’s mercy.

The Sanctus (a complicated eight-part fugue scored for double chorus) begins with a brassy fanfare to announce him “who comes in the name of the Lord”. Finally the Libera me, the oldest music by Verdi in the Requiem, interrupts. Here the soprano cries out, begging, “Deliver me, Lord, from eternal death … when you will come to judge the world by fire.”

When the Requiem was composed, female singers were not permitted to perform in Catholic Church rituals (such as a requiem mass). However, from the beginning Verdi intended to use female singers in the work. In his open letter proposing the Requiem project (when it was still conceived as a multi-author Requiem for Rossini), Verdi wrote: “If I were in the good graces of the Holy Father—Pope Pius IX—I would beg him to permit—if only for this one time—that women take part in the performance of this music; but since I am not, it will fall to someone else better suited to obtain this decree.” In the event, when Verdi composed the Requiem alone, two of the four soloists were sopranos, and the chorus included female voices. This may have slowed the work’s acceptance in Italy.
(source: Wikipedia)