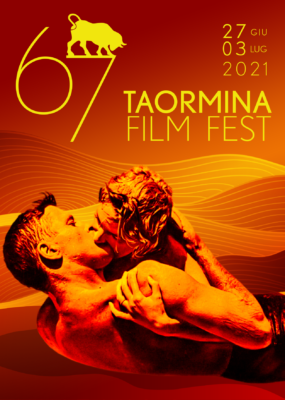 The official poster of the 67th edition of the Taormina Film Fest is a tribute to #Cinema and to Fred Zinnemann’s From Here to Eternity. A modern, bright and sunny reinterpretation of the iconic image of the 8 Oscar-winning film and its two great stars, Deborah Kerr e Burt Lancaster, tight in an unforgettable embrace.

Produced and organized by Videobank SPA

President of the Jury: the director Susanna Nicchiarelli.
After declaring herself “happy and honored”, she added: “it will be a festival to celebrate the bright future of cinema, we will see works by new directors, we will enjoy the beauty of being spectators”.

This year the Taormina Film Fest 67 will live simultaneously in the suggestive Ancient Theater and in Sicilian movie theaters/cinemas, where some of the films and gala evenings will be screened live, including the opening and closing ceremonies.

Press accreditation requests must be submitted, by June 21st, exclusively online at www.taorminafilmfest.it/press

Aug. 27/Sep. 6 - Inferno by Dante at the Alcantara Gourges