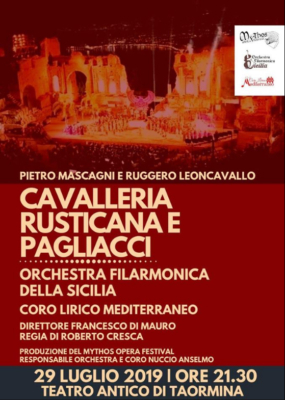 Before the action takes place, the young villager Turiddu had returned from military service to find that his fiancée Lola had married the carter Alfio while Turiddu was away.[11] In revenge, Turiddu had seduced Santuzza, a young woman in the village. As the opera begins, Lola, overcome by her jealousy of Santuzza, has begun an adulterous affair with Turiddu.

Offstage, Turiddu is heard singing a siciliana, “O Lola c’hai di latti la cammisa” (“O Lola! like the snow, pure in thy whiteness!”). To one side is the church; to the other is Lucia’s wine shop and the house where she lives with her son, Turiddu. The villagers move about the square, singing of the beautiful spring day, “Gli aranci olezzano sui verdi margini” (“The air is sweet with orange blossoms”) and a hymn to the Blessed Virgin Mary. Some villagers enter the church, and others wander off still singing.

Santuzza, having slept with Turiddu and suspecting that he has betrayed her for Lola, is distraught and approaches Lucia as she comes out of her house. Santuzza asks for Turiddu, but Lucia replies that he has gone to another town to fetch some wine. Santuzza tells her that he was seen during the night in the village. Lucia asks her inside to talk, but just at that moment Alfio arrives on his wagon, accompanied by the villagers. He praises the joys of a teamster’s life and the beauty of Lola his bride. Alfio asks Lucia for some of her fine old wine. She tells him it has run out and Turiddu has gone away to buy more. Alfio replies that he had seen Turiddu early that morning near his cottage. Lucia starts to express surprise, but Santuzza stops her.

Alfio leaves. The choir inside the church is heard singing the Regina Coeli. Outside, the villagers sing an Easter Hymn, “Inneggiamo, il Signor non è morto” (“We rejoice that our Saviour is living!”) joined by Santuzza. The villagers enter the church, while Santuzza and Lucia remain outside. Lucia asks Santuzza why she signalled her to remain silent when Alfio said that he had seen Turiddu that morning. Santuzza exclaims, “Voi lo sapete” (“You well know”) and tells Lucia the story of her seduction by Turiddu and his affair with Lola. Lucia pities Santuzza, who feels dishonored, having been seduced by Turiddu only to be abandoned by him for his old flame, Lola. Santuzza feels she cannot enter the church, but begs Lucia to go inside herself and pray for Santuzza who stays behind to try to plead with Turiddu to leave Lola and return to her.

Santuzza pleads with Turiddu that he not go to meet with Lola again.
Turiddu arrives. Santuzza upbraids him for pretending to have gone away, when he was actually seeing Lola. Lola enters the square singing. She mocks Santuzza and goes inside the church. Turiddu turns to follow Lola, but Santuzza begs him to stay. Turiddu pushes her away. She clings to him. He loosens her hands, throws her to the ground, and enters the church. Alfio arrives looking for Lola. Santuzza tells him that his wife has betrayed him with Turiddu. Alfio swears to take vendetta (revenge) which causes Santuzza to repent for having disclosed the affair and begs Alfio to stop to no avail.

The square is empty as the orchestra plays the famous Intermezzo.

Turiddu bites Alfio’s ear
The villagers come out of the church. Turiddu is in high spirits because he is with Lola and Santuzza appears to have gone. He invites his friends to his mother’s wine shop where he sings a drinking song, “Viva, il vino spumeggiante” (“Hail to the bubbling wine!”). Alfio joins them. Turiddu offers him wine, but he refuses it. All understand that trouble is in the air. The women leave, taking Lola with them. In a brief exchange of words, Alfio challenges Turiddu to a duel. Following Sicilian custom, the two men embrace, and Turiddu, in a token of acceptance, bites Alfio’s ear, drawing blood which signifies a fight to the death. Alfio leaves and Turiddu calls Lucia back. He tells her that he is going outside to get some air and asks that she be a kindly mother to Santuzza if he should not return: “Un bacio, mamma! Un altro bacio!—Addio!” (“One kiss, mother! One more kiss! – Farewell!”).

Synopsis
Place: Calabria, near Montalto, on the Feast of the Assumption
Time: between 1865 and 1870

Prologue
During the overture, the curtain rises. From behind a second curtain, Tonio, dressed as his commedia character Taddeo, addresses the audience (Si può?… Si può?… Signore! Signori! … Un nido di memorie). He reminds the audience that actors have feelings too, and that the show is about real people.

Act 1
At three o’clock in the afternoon, the commedia troupe enters the village to the cheering of the villagers. Canio describes the night’s performance: the troubles of Pagliaccio. He says the play will begin at “ventitré ore”, an agricultural method of time-keeping that means the play will begin an hour before sunset.[note 3] As Nedda steps down from the cart, Tonio offers his hand, but Canio pushes him aside and helps her down himself.

The villagers suggest drinking at the tavern. Canio and Beppe accept, but Tonio stays behind. The villagers tease Canio that Tonio is planning an affair with Nedda. Canio warns everyone that while he may act the foolish husband in the play, in real life he will not tolerate other men making advances to Nedda. Shocked, a villager asks if Canio really suspects her. He says no, and sweetly kisses her on the forehead. As the church bells ring vespers, he and Beppe leave for the tavern, leaving Nedda alone.

Nedda is frightened by Canio’s vehemence (Qual fiamma avea nel guardo), but the birdsong comforts her (Stridono lassù). Tonio returns and confesses his love for her, but she laughs. Enraged, Tonio grabs Nedda, but she takes a whip, strikes him and drives him off. Silvio, who is Nedda’s lover, comes from the tavern, where he has left Canio and Beppe drinking. He asks Nedda to elope with him after the performance and, though she is afraid, she agrees. Tonio, who has been eavesdropping, leaves to inform Canio so that he might catch Silvio and Nedda together. Canio and Tonio return and, as Silvio escapes, Nedda calls after him, “I will always be yours!”

Canio chases Silvio, but does not catch him and does not see his face. He demands that Nedda tell him the name of her lover, but she refuses. He threatens her with a knife, but Beppe disarms him. Beppe insists that they prepare for the performance. Tonio tells Canio that her lover will give himself away at the play. Canio is left alone to put on his costume and prepares to laugh (Vesti la giubba – “Put on the costume”).

Act 2
As the crowd arrives, Nedda, costumed as Colombina, collects their money. She whispers a warning to Silvio, and the crowd cheers as the play begins.

Colombina’s husband Pagliaccio has gone away until morning, and Taddeo is at the market. She anxiously awaits her lover Arlecchino, who comes to serenade her (O Colombina) from beneath her window. Taddeo returns and confesses his love, but she mocks him. She lets Arlecchino in through the window. He boxes Taddeo’s ears and kicks him out of the room, and the audience laughs.

Arlecchino and Colombina dine, and he gives her a sleeping potion to use later. When Pagliaccio returns, Colombina will drug him and elope with Arlecchino. Taddeo bursts in, warning that Pagliaccio is suspicious of his wife and is about to return. As Arlecchino escapes through the window, Colombina tells him, “I will always be yours!”

As Canio (as Pagliaccio) enters, he hears Nedda (as Colombina) and exclaims “Name of God! Those same words!” He tries to continue the play, but loses control and demands to know her lover’s name. Nedda, hoping to keep to the performance, calls Canio by his stage name “Pagliaccio,” to remind him of the audience’s presence. He answers with his arietta: No! Pagliaccio non son! He sings that if his face is pale, it is not from the stage makeup but from the shame she has brought him. The crowd, impressed by his emotional performance, which they do not realize is real, cheers him.

Nedda, trying to continue the play, admits that she has been visited by the innocent Arlecchino. Canio, furious and forgetting the play, demands the name of her lover. Nedda swears she will never tell him, and it becomes apparent that they are not acting. Beppe asks Tonio to intervene, but Tonio refrains and prevents Beppe from halting the action. Silvio begins to fight his way toward the stage. Canio, grabbing a knife from the table, stabs Nedda. As she dies, she calls: “Help! Silvio!” Silvio attacks Canio, but Canio kills Silvio also. The horrified audience then hears the celebrated final line: