One, No one and One Hundred Thousand

A play based on the namesake novel by Luigi Pirandello

Plot of  the novel
Vitangelo Moscarda discovers by way of a completely irrelevant question that his wife poses to him that everyone he knows, everyone he has ever met, has constructed a Vitangelo persona in their own imagination and that none of these personas corresponds to the image of Vitangelo that he himself has constructed and believes himself to be. The reader is immediately immersed in a cruel game of falsifiying projections, mirroring the reality of social existence itself, which imperiously dictate their rules. As a result, the first, ironic “awareness” of Vitangelo consists in the knowledge of that which he definitely is not; the preliminary operation must therefore consist in the spiteful destruction of all of these fictitious masks. Only after this radical step toward madness and folly in the eyes of the world can Vitangelo finally begin to follow the path toward his true self. He discovers, though, that if his body can be one, his spirit certainly is not. And this Faustian duplicity gradually develops into a disconcerting and extremely complex multiplicity. How can one come to know the true foundation, the substate of the self? Vitangelo seeks to catch it by surprise as its shows itself in a brief flash on the surface of consciousness. But this attempt at revealing the secret self, chasing after it as if it were an enemy that must be forced to surrender, does not give the desired results. J 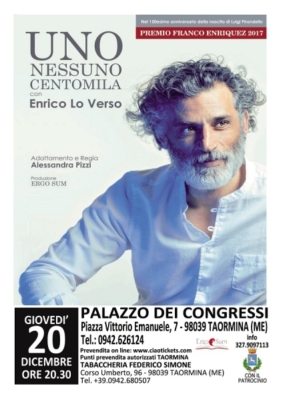 ust as soon as it appears, the unknown self evaporates and recomposes itself into the familiar attitudes of the superficial self. In this extremely modern Secretum where there is no Saint Augustine to indicate, with the profound voice of conscience, the absolute truth to desire, where desperation is entrusted to a bitter humorism, corrosive and salvific at the same time, the unity of the self disintegrates into diverse stratifications. Vitangelo is one of those “…particularly intelligent souls …who break through the illusion of the unity of the self and feel themselves to be multiform, a league of many Is…” as Hermann Hesse notes in the Dissertation chapter of Steppenwolf.

Vitangelo’s extremely lucid reflections seek out the possible objections, confine them into an increasingly restricted space and, finally, kill them with the weapons of rigorous and stringent argumentation. The imaginary interlocutors, (“Dear sirs, excuse me”…”Be honest now”…”You are shocked? Oh my God, you are turning pale”…), which incarnate these objections rather than opening up Vitangelo’s monologue into a dialogue fracture it into two levels: one external and falsely reassuring, the other internal and disquieting, but surely more true. The plural you (“voi”) which punctuates like a returning counterpoint all of the initial part of the novel is much different from the “tu” of Eugenio Montale, which is almost always charged with desperate expectations or improbable alternatives to existence; it represents, rather, the barrier of the conformist conceptions which the lengthy ratiociations of Vitangelo nullify with the overwhelming evidence of implacable reflections.

Vitangelo’s “thinking out loud”, definitely intentional and rigorous, is, however, paradoxically projected toward a completely different epilogue in which the spiral of reasoning gives way to a liberating irrationalism. Liberation for Vitangelo cannot happen through instinct or Eros, as happens in the case of Harry Haller, the steppenwolf, who realizes his metamorphosis through an encounter with the transgressively vital Hermine. Vitangelo’s liberation must follow other avenues; he must realize his salvation and the salvation of his reason precisely through an excess of reason. He seems to say to us: “Even reason, dear sirs, if it is alleviated of its role as a faculty of good sense which councels adaptation to historical, social and existential “reality”, can become a precious instrument of liberation.” This is not true because reason, when pushed to its ultimate limits, can open up to new metaphysical prospects, but because, having reached its limits, deliriously wandering around in cerebreal labyrinths and in an atmosphere satured with venom, it dies by its own hand. The total detachment of Vitangelo from false certainties is fully realized during a period of convalescence from illness. Sickness, in Pirandello as in many other great writers, is experienced as a situation in which all automatic behavior is suspended and the perceptive faculties, outside of the normal rules, seem to expand and see “with other eyes.” In this moment the ineptitude that Vitangelo shares with Mattia Pascal and other literary characters of the beginning of the 20th century demonstrates its positive potential and becomes a conscious rejection of any role, of any function, of any perspective based on a utilitaristic vision. The episode of the woolen blanket signals the unbrigeable distance which now separates Vitangelo from the rules of reality in which the judge who has come to interrogate him appears to be completely enmeshed. While the scrupulous functionary, completely absorbed in his role, collects the useful elements for his sentencing, Vitangelo contemplates with “ineffable delight” the woolen blanket covering his legs: “I saw the countryside: as if it were all an endless carpet of wheat; and, hugging it, I was beatified, feeling myself truly, in the midst of all that wheat, with a sense of immemorial distance that almost cause me anguish, a sweet anguish. Ah, to lose oneself there, lay down and abandon oneself, just like that among the grass, in the silence of the skies: to fill one’s soul with all that useless blue, sinking into it every thought, every memory!”

Once cured of his illness, Vitangelo has a completely new perspective, completely “foreign”. He no longer desires anything and seeks to follow moment by moment the evolution of life in him and the things that surround him. He no longer has any history or past, he is no longer in himself but in everything around and outside of him.
(source: Wikipedia)