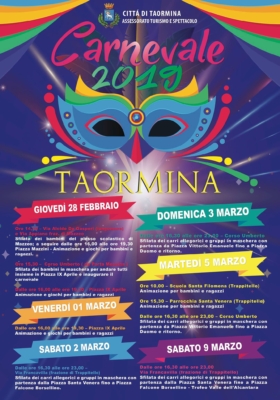 Carnival is a Western Christian festive season that occurs before the liturgical season of Lent. The main events typically occur during February or early March, during the period historically known as Shrovetide (or Pre-Lent). Carnival typically involves a public celebration and/or parade combining some elements of a circus, masks, and a public street party. People wear masks and costumes during many such celebrations, allowing them to lose their everyday individuality and experience a heightened sense of social unity. Common features of carnival include mock battles such as food fights; social satire and mockery of authorities; the grotesque body displaying exaggerated features, especially large noses, bellies, mouths, and phalli, or elements of animal bodies; abusive language and degrading acts; depictions of disease and gleeful death; and a general reversal of everyday rules and norms.