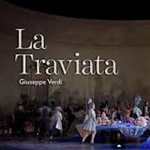 La Traviata (The Fallen Woman) is an opera in three acts by Giuseppe Verdi set to an Italian libretto by Francesco Maria Piave. It is based on La Dame aux Camélias (1852), a play adapted from the novel by Alexandre Dumas, fils.
It is considered the most famous opera of Verdi
The Philarmonink Orchestra of Calabria will be directed by Filippo Arlia.

Synopsis Place: Paris and its vicinity. Time: Beginning of the 19th century

Act 1 The salon in Violetta’s house

Scene 1: Party (attrib. Carl d’Unker) Violetta Valéry, a famed courtesan, throws a lavish party at her Paris salon to celebrate her recovery from an illness. Gastone, a viscount, has brought with him a friend, Alfredo Germont, a young bourgeois from a provincial family who has long adored Violetta from afar. While walking to the salon, Gastone tells Violetta that Alfredo loves her, and that while she was ill, he came to her house every day. Alfredo joins them, admitting the truth of Gastone’s remarks.
Baron Douphol, Violetta’s current lover, waits nearby to escort her to the salon; once there, the Baron is asked to give a toast, but refuses, and the crowd turns to Alfredo, who agrees to sing a brindisi – a drinking song (Alfredo, Violetta, chorus: Libiamo ne’ lieti calici – “Drink from the joyful cup”).
From the next room, the sound of the orchestra is heard and the guests move there to dance. After a series of severe coughs and almost fainting, Violetta begins to feel dizzy and asks her guests to go ahead and to leave her to rest until she recovers. While the guests dance in the next room, Violetta looks at her pale face in her mirror. Alfredo enters and expresses his concern for her fragile health, later declaring his love for her (Alfredo, Violetta: Un dì, felice, eterea – “One day, happy and ethereal”). At first, she rejects him because his love means nothing to her, but there is something about Alfredo that touches her heart. He is about to leave when she gives him a flower, telling him to return it when it has wilted, which will be the very next day.
“È strano! … Ah, fors’è lui” MENU0:00 Act 1 finale, sung by Lucrezia Bori in 1910 for Edison Records Problems playing this file? See media help. After the guests leave, Violetta wonders if Alfredo could actually be the one in her life (Violetta: È strano! … Ah, fors’è lui – “Ah, perhaps he is the one”). But she concludes that she needs freedom to live her life (Violetta, Alfredo: Sempre libera – “Always free”). From off stage, Alfredo’s voice is heard singing about love as he walks down the street.

Three months later, Alfredo and Violetta are living together in a peaceful country house outside Paris. Violetta has fallen in love with Alfredo and she has completely abandoned her former life. Alfredo sings of their happy life together (Alfredo: De’ miei bollenti spiriti / Il giovanile ardore – “The youthful ardor of my ebullient spirits”). Annina, the maid, arrives from Paris, and, when questioned by Alfredo, tells him that she went there to sell the horses, carriages and everything owned by Violetta to support their country lifestyle.
Alfredo is shocked to learn this and leaves for Paris immediately to settle matters himself. Violetta returns home and receives an invitation from her friend, Flora, to a party in Paris that evening. Alfredo’s father, Giorgio Germont, is announced and demands that she break off her relationship with his son for the sake of his family, since he reveals that Violetta’s relationship with Alfredo has threatened his daughter’s engagement (Giorgio: Pura siccome un angelo, Iddio mi diè una figlia – “Pure as an angel, God gave me a daughter”) because of Violetta’s reputation. Meanwhile, he reluctantly becomes impressed by Violetta’s nobility, something which he did not expect from a courtesan. She responds that she cannot end the relationship because she loves him so much, but Giorgio pleads with her for the sake of his family. With growing remorse, she finally agrees (Violetta, Giorgio: Dite alla giovine, sì bella e pura, – “Tell the young girl, so beautiful and pure,”) and says goodbye to Giorgio. In a gesture of gratitude for her kindness and sacrifice, Giorgio kisses her forehead before leaving her weeping alone.
Violetta gives a note to Annina to send to Flora accepting the party invitation and, as she is writing a farewell letter to Alfredo, he enters. She can barely control her sadness and tears; she tells him repeatedly of her unconditional love (Violetta: Amami, Alfredo, amami quant’io t’amo – “Love me, Alfredo, love me as I love you”). Before rushing out and setting off for Paris, she hands the farewell letter to her servant to give to Alfredo.
Soon, the servant brings the letter to Alfredo and, as soon as he has read it, Giorgio returns and attempts to comfort his son, reminding him of his family in Provence (Giorgio: Di Provenza il mar, il suol chi dal cor ti cancellò? – “Who erased the sea, the land of Provence from your heart?”). Alfredo suspects that the Baron is behind his separation with Violetta, and the party invitation, which he finds on the desk, strengthens his suspicions. He decides to confront Violetta at the party. Giorgio tries to stop Alfredo, but he rushes out.

Act 2, scene 2 from Fife Opera’s 2004 production At the party, the Marquis tells Flora that Violetta and Alfredo have separated, much to the amazement of everyone who had previously seen the happy couple. She calls for the entertainers to perform for the guests (Chorus: Noi siamo zingarelle venute da lontano – “We are gypsy girls who have come from afar”; Di Madride noi siam mattadori – “We are matadors from Madrid”). Gastone and his friends join the matadors and sing (Gastone, chorus, dancers: È Piquillo un bel gagliardo Biscaglino mattador – “Piquillo is a bold and handsome matador from Biscay”).
Violetta arrives with Baron Douphol. They see Alfredo at the gambling table. When he sees them, Alfredo loudly proclaims that he will take Violetta home with him. Feeling annoyed, the Baron goes to the gambling table and joins him in a game. As they bet, Alfredo wins some large sums until Flora announces that supper is ready. Alfredo leaves with handfuls of money.
As everyone is leaving the room, Violetta has asked Alfredo to see her. Fearing that the Baron’s anger will lead him to challenge Alfredo to a duel, she gently asks Alfredo to leave. Alfredo misunderstands her apprehension and demands that she admit that she loves the Baron. In grief, she makes that admission and, furiously, Alfredo calls the guests to witness what he has to say (Questa donna conoscete? – “You know this woman?”). He humiliates and denounces Violetta in front of the guests and then throws his winnings at her feet in payment for her services. She faints onto the floor. The guests reprimand Alfredo: Di donne ignobile insultatore, di qua allontanati, ne desti orror! (“Ignoble insulter of women, go away from here, you fill us with horror!”).
In search of his son, Giorgio enters the hall and, knowing the real significance of the scene, denounces his son’s behavior (Giorgio, Alfredo, Violetta, chorus: Di sprezzo degno sè stesso rende chi pur nell’ira la donna offende. – “A man, who even in anger, offends a woman renders himself deserving of contempt.”).
Flora and the ladies attempt to persuade Violetta to leave the dining room, but Violetta turns to Alfredo: Alfredo, Alfredo, di questo core non puoi comprendere tutto l’amore… – “Alfredo, Alfredo, you can’t understand all the love in this heart…”.

Cover of a circa 1855 vocal score with an engraving by Leopoldo Ratti Dr. Grenvil tells Annina that Violetta will not live long since her tuberculosis has worsened. Alone in her room, Violetta reads a letter from Alfredo’s father telling her that the Baron was only wounded in his duel with Alfredo; that he has informed Alfredo of the sacrifice she has made for him and his sister; and that he is sending his son to see her as quickly as possible to ask for her forgiveness. But Violetta senses it is too late (Violetta: Addio, del passato bei sogni ridenti – “Farewell, lovely, happy dreams of the past”).
Annina rushes in the room to tell Violetta of Alfredo’s arrival. The lovers are reunited and Alfredo suggests that they leave Paris (Alfredo, Violetta: Parigi, o cara, noi lasceremo – “We will leave Paris, O beloved”).
But it is too late: she knows her time is up (Alfredo, Violetta: Gran Dio!…morir sì giovane – “Great God!…to die so young”). Alfredo’s father enters with the doctor, regretting what he has done. After singing a duet with Alfredo, Violetta suddenly revives, exclaiming that the pain and discomfort have left her. A moment later, she dies in Alfredo’s arms.