Tosca is an opera in three acts by Giacomo Puccini to an Italian libretto by Luigi Illica and Giuseppe Giacosa. It premiered at the Teatro Costanzi in Rome on 14 January 1900. The work, based on Victorien Sardou’s 1887 French-language dramatic play, La Tosca, is a melodramatic piece set in Rome in June 1800, with the Kingdom of Naples’s control of Rome threatened by Napoleon’s invasion of Italy. It contains depictions of torture, murder and suicide, as well as some of Puccini’s best-known lyrical arias, and has inspired memorable performances from many of opera’s leading singers. The dramatic force of Tosca and its characters continues to fascinate both performers and audiences, and the work remains one of the most frequently performed operas.

The performance is a production of  Taormina Opera Stars

In the church of S Andrea della Valle, the fugitive Angelotti takes refuge in a private chapel. The painter Cavaradossi returns to the canvas he is painting, a picture of Mary Magdalene, influenced by the features of his beloved Tosca and by a woman he has often seen in the church. The sacristan complains of the trouble Cavaradossi gives him. As he leaves, Angelotti emerges from hiding, explaining that he has escaped from imprisonment in the Castel Sant’Angelo. The voice of Tosca is heard and Angelotti hides again. Tosca is jealous of what she thinks may have been an assignation with another woman but agrees to meet her lover after her evening performance. The church fills for a celebration of a supposed victory over Napoleon and Baron Scarpia and his agents seek for signs of Angelotti, suspicion falling on Cavaradossi as a possible accomplice. Scarpia succeeds now in arousing further jealousy in Tosca, who has returned, showing her a fan found in the chapel, belonging, in fact, to Angelotti’s sister. Scarpia orders his men to follow Tosca, when she leaves, as a victory Te Deum is sung. In Scarpia’s apartment the sound is heard of an entertainment being given below for Queen Caroline, dancing and a performance by Tosca. Cavaradossi has been arrested and is interrogated and, when Tosca comes in, tortured in the next room, to elicit information from her. She betrays Angelotti’s hiding-place at the well in the garden of Cavaradossi’s villa. The painter is to be shot at dawn, but can be saved if Tosca will give in to Scarpia’s demands on her. She pretends to agree and when he has signed a safe-conduct she kills him. In the third act, at Castel Sant’Angelo, Cavaradossi prepares for death, as dawn draws near. Tosca is brought in and, left alone with him, explains how there is to be a mock-execution, after which they can escape together. In the event Scarpia has his revenge. His orders did not countermand the execution and Cavaradossi is shot. When Tosca realises that he is dead, she leaps from the battlements to her own death, while Scarpia’s men draw threateningly near, having discovered their master’s body.

Tosca remains a major work in operatic repertoire, although subject to relentlessly hostile criticism on the grounds of the brutal coarseness of its plot. It is, in fact, dramatically convincing, up to the moment of final irony. Cavaradossi is entrusted with his first moving aria in the opening act, Recondita armonia (Secret harmony), when he contrasts the dark-haired beauty of Tosca with the fair- haired stranger he has seen in the church, both combined in his painting. Cavaradossi’s other great aria comes in the third act, as he prepares for death. In E lucevan le stelle (And the stars shone) he regrets his coming execution and parting from Tosca. The rôle of Tosca has a strong dramatic appeal. Her best known aria is Vissi d’arte (I have lived for art), as she despairs at the predicament that Scarpia has posed for her. 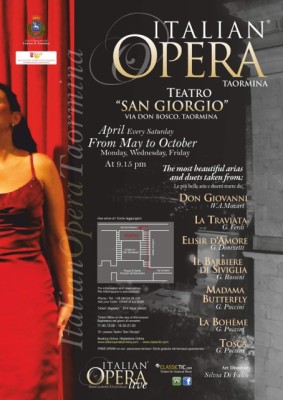 Do you love Opera music? The artists of the Italian Opera Taormina perform every week in Taormina. More than one hour of timeless arias from some of the most famous Italian operas.

An extraordinary journey with the most famous arias and duet from “Italian Operas”. You will hear music from great Italian operas interpreted by professional singers who have performed in the most important Italian and international theatres, performed with piano accompaniment.

Here you can have a look at the program of each evening: