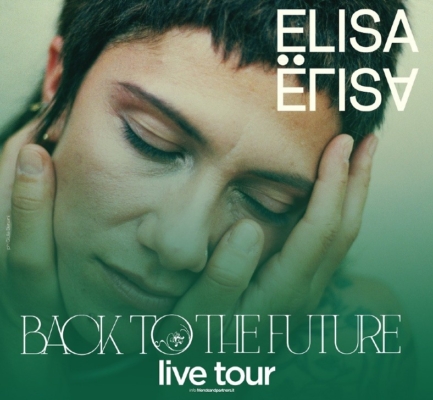 A message for the environment, a trip to 20 regionsthree major events at the Verona Arena with many guests, the collaboration with UN SGD Action Campaign, one traveling party for music thinking about the planet. Elisa back on stage with a great live project that sees her perform throughout Italy, no region excluded, starting from the end of May.

“The world asks us to be green: we all have to make the right choice “ (Elisa). Back to the Future Live Tour is a mammoth live project with the planet in mind.
Over 30 dates scheduled for Back to the Future Live Tour, in places of particular natural and landscape value and think on the basis of a protocol for a low environmental impact.
Each stage becomes an opportunity for enhance the place that hosts it, each is characterized by a particular naturalistic, historical and / or cultural importance: a Park, an area of ​​badlands, a wood, an ancient village, a historic place (the choice of the stages was made involving the territories themselves). In fact, at the center there is always a particular commitment to the environment, following an important protocol drawn up by the Politecnico di Milano and Music Innovation Hub.
During the tour the Music for the planet project a favor of Legambiente, for the planting of trees in various Italian areas. Elisa’s constant interest in the Planet led the UN to appoint her as the first “Ally” of the SDG Action Campaign on Sustainable Development Goals. Elisa is thus the Italian voice that will bring, in the public and in his private life, the message of #FlipTheScript: the impossible that becomes possible if we act together, which means taking back the world because it belongs to everyone, and not just to some.
(source: https://europe-cities.com/2022/04/03/back-to-the-future-live-tour-tickets-for-the-green-event/)

Elisa (born in 1977) is an Italian singer-songwriter. She is one of few Italian musicians to write and record mainly in English. She draws inspiration from many genres such as pop, alternative rock, electronica and trip hop. In Europe she is perhaps most recognised for the single “Come Speak to Me”, while American audiences may recognise the song “Dancing” as featured in both the 2006 and 2007 seasons of So You Think You Can Dance. On December 18, 2012, her collaboration with Ennio Morricone, “Ancora qui”, was featured on Quentin Tarantino’s film, Django Unchained and its soundtrack album, which was nominated for a Grammy Award for Best Compilation Soundtrack for Visual Media.

She earned six awards at the Sanremo Music Festival in 2001, one Targa Tenco, two Lunezia Awards, 13 Italian, Wind & Music Awards, one award at the Festivalbar, one Nastro d’argento, and several other awards, including an MTV Europe Music Award.

Elisa was born in Trieste in north-eastern Italy. She grew up in Monfalcone (5 km from Slovenia, 80 km from Austria). Living in a border-area, where she had the opportunity to listen to different languages and experience various cultures, was important for Elisa’s later inspirations and helped her develop a high aptitude to sing in multiple languages. Her early influences include Björk, PJ Harvey, Tori Amos, Aretha Franklin and Ella Fitzgerald,[6] while she has credited Rudyard Kipling and Jim Morrison of The Doors as lyrical inspirators.